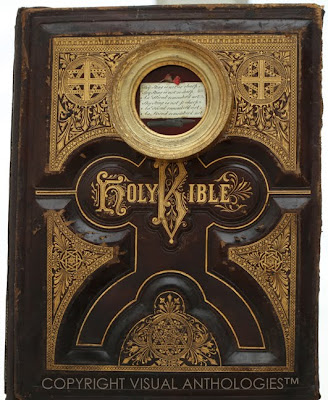 This book represents part of a major work

on the life and times of Sara Coppio Sullam. 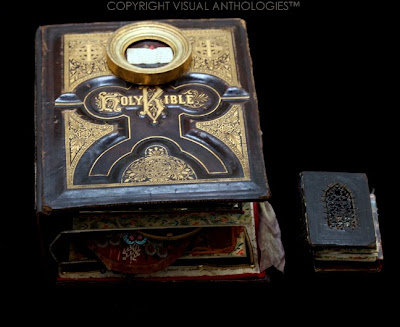 This cover, taken from an antique salesman’s Bible Catalogue

was reconstructed together with a spine from the same catalogue.

It was then attached to a matching kid leather handmade back cover. 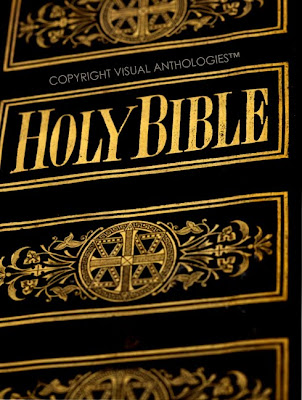 The reasoning behind this specific cover was not only for the beauty
of the highly detailed gilting
but
more importantly because the design encompassed a “Magen David”, a Star of David
and a Cross intersecting each other.

This relates to the subject matter in that the lives of Sara, a Jewess
and Anseldo Ceba, a Christian, intersected.
It also alludes to that part of this story whereby Ceba wanted Sullam to convert to Catholicism. 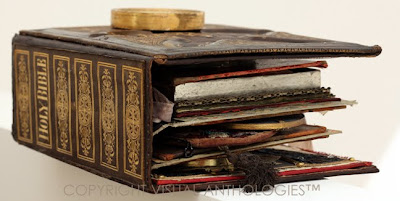 For him, it was the main reason to keep the relationship going.

A great majority of the correspondence and indeed the major part of their relationship was devoted to this issue. 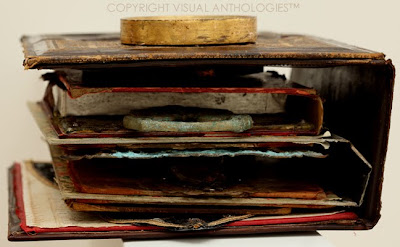 An antique gold Italian frame, slightly altered, houses a 17th century text
(gifted by Judi Riesch) which related to Sara’s plight after being accused of plagiarism.

The gold colour and the circle shape were specifically chosen to represent the forced dress of the Jews at the time for they had to wear a gold circle to identify that they were Jews. 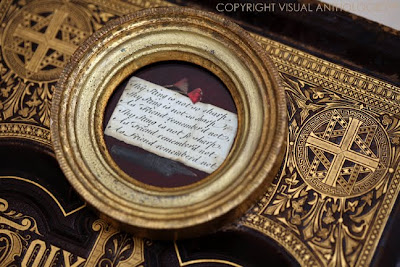 their relationship, Sullam had “the finger” pointed at her for plagiarism after

not bending to Ceba’s wishes to convert her. 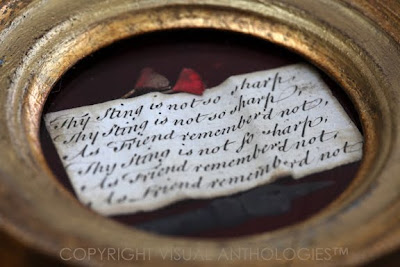 As friend remembered not

As friend remembered not 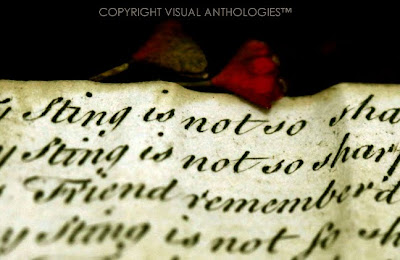 The lone Magen David at the base of the Bible cover, 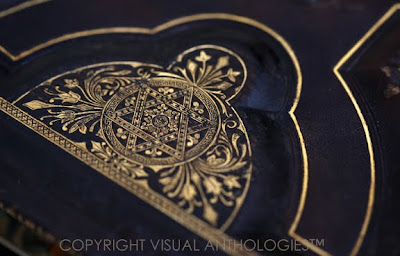 speaks to Sara as a Jew,
a lone figure fighting for her rights to stay as such

and fighting for herself, in her own defence against a backdrop of anti- 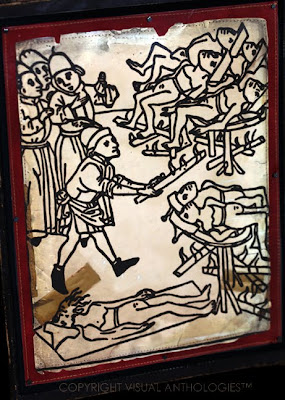 “The Burning of the Jews”

represents the Inquisition period and all that that encompasses. 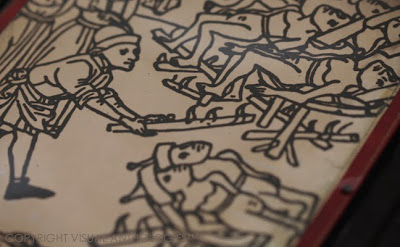 Stitched on to black and red velvet some of the colours that represent the Inquisition
It was nailed into the inside cover as people were nailed and tied to the stake. 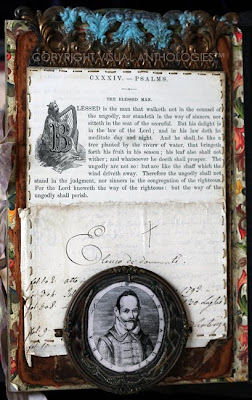 The reliquary of Anseldo Ceba
sits atop an antique book cover
which has two antique papers attached. 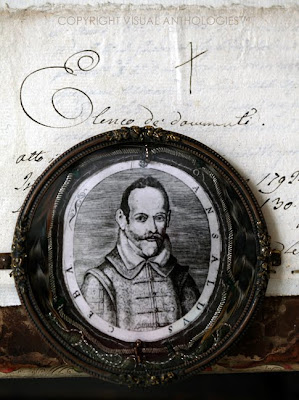 One is a document found in Arezzo years ago. Pertinent for both the date marked above the
reliquary and the hand-drawn cross marked above. 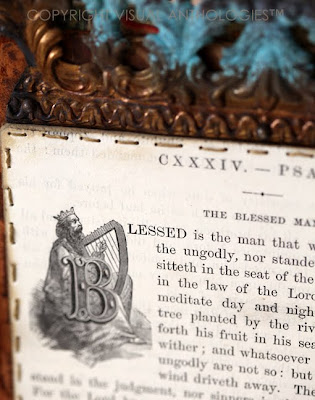 Found in the same salesman’s Bible,
this Psalm of King David,
chosen and placed here
for its pertinence to both parties. 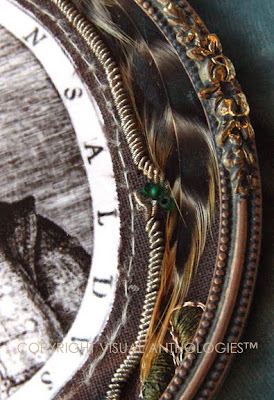 There are so many parallels here to the entire story,

too long to mention here

but it is highly significant on many levels. 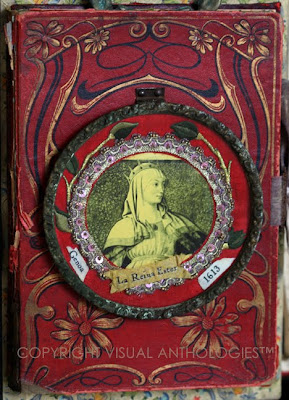 This antique book cover was used for a number of reasons here.

There is a certain romanticism to this real life story,

at least at the beginning

and I felt this cover portrayed that feeling.

However ,the colours were significant for red and yellow were the forced colours that Jews had to
wear to identify themselves depending on which country they were in. 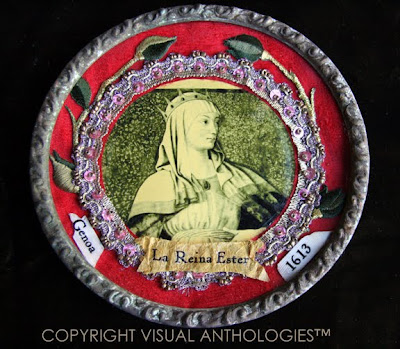 The greens and reds were also chosen for as previously mentioned,

They were colours symbolic of the Inquisition. 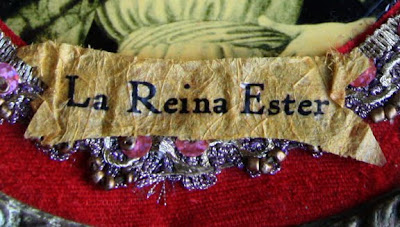 Pausing here for now, part 2 soon.
Thanks for reading.
xo
Posted by Judy at 12:14 AM 25 comments: Links to this post

Photo and video editing at www.OneTrueMedia.com 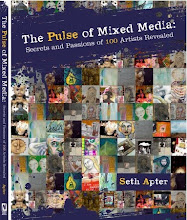 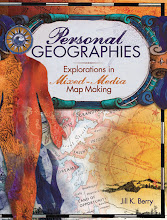 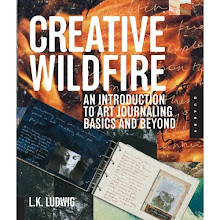 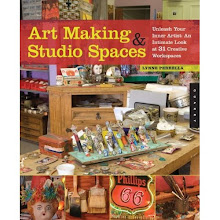 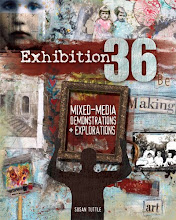 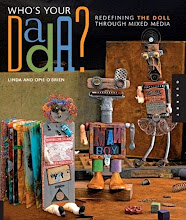 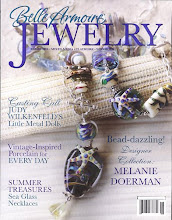 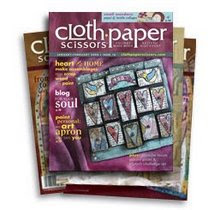 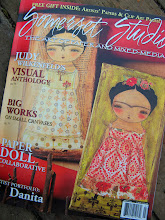 "Of Elephants and Dreams"

Photo and video editing at www.OneTrueMedia.com